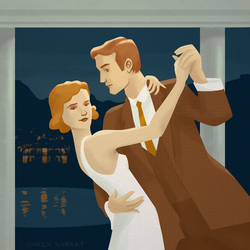 F. Scott Fitzgerald's ‘‘Winter Dreams’’ was first published in Metropolitan Magazine in December 1922 and collected in All The Sad Young Men in 1926. The story has come to be regarded as one of Fitzgerald's finest and most eloquent statements on the destructive nature of the American dream.

‘‘Winter Dreams’’ chronicles the rise of Dexter Green, a hardworking, confident young man who becomes caught up in the pursuit of wealth and status. When he meets Judy Jones, a beautiful, vibrant young woman, he sees in her an embodiment of a glittering world of excitement and promise. Judy represents for him the epitome of what he considers to be the intense and passionate life of the American elite. Through her, Dexter hopes to experience all the benefits that he believes this lifestyle can afford him. At the beginning of their relationship, he feels ecstatic. His senses become fine-tuned to the rarefied world with which he has come in contact. As a result, he becomes filled with an overwhelming consciousness and appreciation of this new life, though at the same time he recognizes the ephemeral quality of this moment in time, admitting that he will probably never again experience such happiness. Yet he fails to see the hollowness beneath Judy's surface, a hollowness that is also at the core of her world. By the end of the story, when Dexter watches his beautiful vision crumble, he is forced to admit the illusory nature of his winter dreams.
From:
"Winter Dreams." Enotes.com. Enotes.com. Web. 14 May 2012. <http://www.enotes.com/winter-dreams>.

Most good stories start with a fundamental list of ingredients: the initial situation, conflict, complication, climax, suspense, denouement, and conclusion. Great writers sometimes shake up the recipe and add some spice.

Initial Situation: A Kid With a Dream
At the start of "Winter Dreams," Dexter Green is a fourteen-year-old Minnesotan kid. He spends every winter waiting for the sun to melt the snow on the Sherry Island Golf Course so that he can caddy for the summer. Dexter has a natural attraction to the world of the wealthy. We know that he is better at mingling with the upper class than the other caddies because, when he quits his caddying job, Mr. Mortimer Jones says that Dexter is "The best — caddy I ever saw" (1.10).

Conflict: Get Rich Quick
The main conflict of "Winter Dreams" is that Dexter dreams of joining the ranks of the rich. But when he sees Judy Jones – the lovely daughter of one of Sherry Island Golf Club's members – on the golf course, he realizes that he has been going about it all wrong. He cannot become rich by earning extra pocket money here and there. He decides to remake himself entirely, so that he will be worthy of someone as lovely as Judy. Once Dexter sees Judy for the first time, his "winter dreams" of fame and fortune become definite ambitions that he will give anything to achieve.

Complication
It's Complicated with Judy Jones Dexter Green has been busy remaking himself. It's been nine years since he quit his job at the golf course, he has gone to college on the East Coast, and he has come back to Minnesota to make some smart investments in the laundry business. Dexter is already an up-and-coming rich guy. He now plays golf with the men he used to caddy for back in the day. Just as it seems as though all of Dexter's dreams are coming true, Judy Jones comes back into his life. He meets Judy on a swimming platform in the middle of Black Bear Lake, near the Sherry Island Golf Club. Dexter realizes that he has always wanted Judy – but Judy doesn't want Dexter back in the same way. So even though Dexter's business life is running smoothly, his romantic dream of Judy Jones remains out of his reach.

Climax: Judy's Back
We know that the introduction of Irene Scheerer into Dexter's life probably isn't going to alter Dexter's feelings for Judy. After all, the adjectives that Fitzgerald uses to describe Irene – "sturdily popular" (4.18) and "solid" (4.18) – are not the stuff of romance. We are just waiting for Judy to come back on the scene. And indeed, before we know it, Judy reappears and Dexter's on-again-off-again affair with her starts up once more.

Suspense: Do Dreams Really Come True?
We know that Dexter's relationship with Judy is doomed to failure (since she just is not that into him). How is this going to jive with the big dreams he has? What will happen next?

Denouement: Giving up on the Dream
Failing in both his relationships with steady Irene and fickle Judy, Dexter gives up on women all together. He registers for the Army when the U.S. joins World War I in 1917. And then he moves to New York to make even more money. Dexter dedicates himself to becoming as rich as he possibly can – and he leaves behind his romantic illusions of Judy Jones for good.

Conclusion: Winter Nightmares
By the end of the story, Dexter has apparently achieved all of his goals: he is rich and successful. In fact, he is so well off that "there were no barriers too high for him" (6.2) to overcome. At this point, Dexter has not been back to the Midwest for seven years. Those years pining after Judy Jones are long past. But it is not until his business associate, Devlin, mentions in passing that he knows an unhappily married woman named Judy Simms (maiden name Jones) that Dexter realizes how far he has come from the romantic boy he was in Black Bear, Minnesota. In his pursuit of money, Dexter has forgotten the ideals of romance and grace that led him to try to become wealthy in the first place. He has grown hard-minded and unemotional. Not even the news that Judy has ruined her life with a bad marriage can truly move him. Dexter weeps when he realizes there is nothing left of the boy he once was. Weirdly, Dexter's success has killed off his winter dreams. 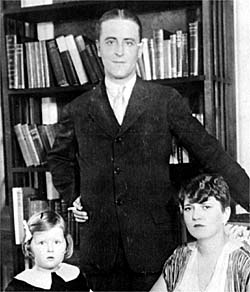 This American Masters documentary takes a solemn look at F. Scott Fitzgerald's life and literary legacy. While acknowledging his demons (alcoholism, his wife Zelda's mental illness), it only glancingly refers to his and Zelda's infamous antics and notorious partying. Instead, this 85-minute biography looks at the influence of his St. Paul, Minnesota, childhood, where he was the poorest in a well-to-do neighborhood, and the driving ambition that sent him to Princeton, where he never felt he measured up to his wealthier classmates. This obsession with class and money drove his writing and his marriage to Zelda, a socially prominent Southern belle. Weighing in are such literary luminaries as biographer A. Scott Berg and novelists E.L. Doctorow and Ward Just, as well as the usual host of scholars. These experts are balanced nicely with the reminiscences of those who knew the Fitzgeralds more intimately, including former neighbors and Zelda's childhood friends.