How did Shelley come up with such a gruesome tale? 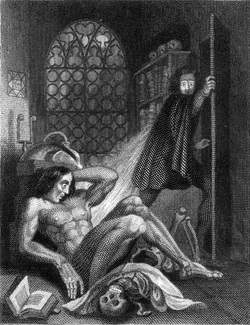 Shelley explains the circumstances behind her writing Frankenstein in the preface to the novel.  She and Percy were touring Switzerland with Lord Byron during the summer of 1816.  It was a remarkably rainy and wet summer, and the three were confined inside for days at a time.  To pass the time they often read German ghost stories to one another.  On one of these nights, Byron suggested a writing competition to see who could write the scariest story.  Mary was the only one to complete hers.
She says that several days had past and still she had no inspiration.  The story actually was inspired by a nightmare she had after discussing the experiments of Erasmus Darwin to animate lifeless matter.

Background Information on the Creation of Frankenstein

In the 1831 edition of Frankenstein Mary Shelley 's introduction explains how she, "then a young girl, came to think of and to dilate upon so very hideous an idea." On a rainy evening in June 1816, they all gathered at the fireside to read aloud Fantasmagoriana, ou Recueil d'histoires d'apparitions de spectres, revenants, fantômes, etc. (1812), a French translation of a German book of ghost stories. At Byron's suggestion, they each agreed to write a horror story. The next day Byron read the beginning of his tale, Shelley "commenced one founded on the experiences of his early life," and Polidori had "some terrible idea about a skull-headed lady who was so punished for peeping through a key-hole." Mary wanted to think of a story "which would speak to the mysterious fears of our nature and awake thrilling horror--one to make the reader dread to look round, to curdle the blood, and quicken the beatings of the heart." The others dropped their stories, but kept asking Mary: "Have you thought of a story?" to which she had to reply with "a mortifying negative." Finally, one night, after a discussion among Byron, Polidori, and Percy Shelley concerning galvanism and Erasmus Darwin's success in causing a piece of a vermicello to move voluntarily, she fell into a reverie of waking dream where she saw "the pale student of unhallowed arts kneeling beside the thing he had put together." She felt the terror for the artist who endeavored "to mock the stupendous mechanism of the Creator of the world" by giving the "spark of life" to a "hideous corpse." Next morning, after the poets went off sailing, she started work on what was to become chapter 4 of Frankenstein, which begins, "It was on a dreary night of November...."

Encouraged by Percy, Mary developed the little ghost story into a novel, which she finished in May of 1817 at Marlow and published in March 1818. To those who have not read the book, the name Frankenstein is often associated with the monster rather than its creator. The mistake is perhaps not altogether erroneous, for as many critics point out the creature and his maker are doubles of one another, or doppelgängers. Their relationship is similar to that between the head and the heart, or the intellect and the emotion. The conception of the divided self--the idea that the civilized man or woman contains within a monstrous, destructive force--emerges as the creature echoes both Frankenstein's and narrator Robert Walton's loneliness: all three wish for a friend or companion. Frankenstein and his monster alternately pursue and flee from one another. Like fragments of a mind in conflict with itself, they represent polar opposites which are not reconciled, and which destroy each other at the end. For example, the creature enacts the repressed desires of its maker, alleviating Victor Frankenstein's fear of sexuality by murdering his bride, Elizabeth Lavenza, on their wedding night. Identities merge, as Frankenstein frequently takes responsibility for the creature's action: for instance, after the deaths of the children William and Justine, both of which were caused by the creature, Frankenstein admits they were "the first hapless victims to [his] unhallowed arts."

In a recent reading of Frankenstein , Mellor demonstrates a link between events, dates, and names in the novel and those in Mary Shelley 's life. Mellor argues that the novel is born out of a "doubled fear, the fear of a woman that she may not be able to bear a healthy normal child and the fear of a putative author that she may not be able to write.... the book is her created self as well as her child." Dated 11 December 17--to 12 September 17--, the letters that form the narration of the novel--from Walton to his sister Margaret Walton Saville (whose initials are those of Mary Wollstonecraft Shelley )--are written during a period similar in duration to Mary Shelley 's third pregnancy, during which she wrote Frankenstein. Mellor discovered that the day and date on which Walton first sees the creature, Monday, 31 July, had coincided in 1797, the year in which Mary Shelley was born. This fact and other internal evidence led Mellor to conclude that the novel ends on 12 September 1797, two days after Mary Wollstonecraft's death: " Mary Shelley thus symbolically fused her book's beginning and ending with her own--Victor Frankenstein's death, the Monster's promised suicide, and her mother's death from puerperal fever can all be seen as the consequence of the same creation, the birth of Mary Godwin the author."

The theme of creation is highlighted by the many references to Paradise Lost (1667), John Milton's epic rendition of the biblical story of Genesis, which becomes an important intertext of the novel. "Did I request thee, Maker, from my clay / To mould me man? Did I solicit thee / From darkness to promote me?--," from book 10, is quoted as the epigraph, and Milton's poem is one of the books the creature reads. The monster is caught between the states of innocence and evil: like Adam he is "apparently united by no link to any other being in existence," but as an outcast and wretch he often considers "Satan as the fitter emblem" of his condition. Victor Frankenstein, too, is at once God, as he is the monster's creator, but also like Adam, an innocent child, and like Satan, the rebellious overreacher and vengeful fiend. Throughout the novel there is a strong sense of an Edenic world lost through Frankenstein's single-minded thirst for knowledge.

Frankenstein is also cast as a Promethean figure, striving against human limitations to bring light and benefit to mankind. While he advises Walton to "Seek happiness in tranquillity and avoid ambition," he nevertheless invites his listeners to share in the grandeur of his dreams, to glory in his ability to create a sublime facsimile of the human self. Frankenstein's fall, after all, results not from his creative enterprise, but from his failure and inability to give love to his creature. Indeed, another central concern of the novel is the conflict of individual desire against that of familial and social responsibility. George Levine writes: "Frankenstein spells out both the horror of going ahead and the emptiness of return. In particular, it spells out the price of heroism." Unlike her mother, Mary Wollstonecraft, and unlike the Romantic poets generally, Shelley advocates self-denial and social harmony over self-assertion, confrontation, and the individualistic, imaginative act. In her novel she shows that Frankenstein's quest is an act of selfish obsession, one that destroys his domestic relationships. He is contrasted with the mariner Robert Walton, whose concern for others ultimately wins over his ambition to reach the "region of beauty and light."

Finally, the use of the nightmarish murders, the demonlike monster, the terror of the unknown, and the destruction of the idyllic life in nature by a dark, ambiguous force places Frankenstein in the tradition of the Gothic novel. Like other Gothic authors, Shelley situates good and evil as a psychological battle within human nature. Both Frankenstein and the creature initially have "benevolent" feelings and intentions, but eventually both become obsessed with ideas of destruction and revenge. Shelley's novel successfully manipulates the conventions of the genre, replacing the stock Gothic villain with morally ambiguous characters who reflect the depth and complexities of the human psyche.