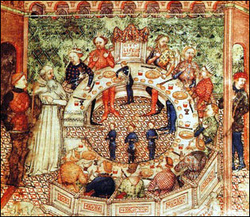 How to read a legend?

- Different Versions of a Tale Exist: It is true that a British Chieftain by the name of Arthur (Arturius) helped defend Britain against Saxon invaders, but the rest is up to the imagination.  Legends become so because their stories are continually being passed on like a game of telephone that has been going on for centuries.  The Legends of Arthur were originally passed down through oral traditions, and even when they were written down there were many variations.   Not until the 1500s did Sir Thomas Malory manage to collect the various legends concerning Arthur and write them into the first complete English collection: Le Morte d' Arthur (The Death of Arthur).  He wove together 8 strands of a French Romance in order to present the unified tale.  That is over 5 centuries of telling and retelling the same tale, and his main source for the legendary and ideal English king was the French.  And the tale did not stop being retold after Malory's comprehensive version.  Writers like Alfred, Lord Tennyson, T. H. White, and Mary Stewart all have been inspired to dramatize the tale.

- Extraordinary Events are Ordinary: All of you realists will need a heavy dose of the suspension of disbelief.  Enjoy the wonder and the mystery of the unbelievable plot.  Spells, enchantments, magicians who see into the future: these are all daily occurrences.  Knights can duel for hours with an apparent limitless supply of blood and energy.  These are tall-tales.  We have the giant Paul Bunyan with his huge blue ox and Johny Appleseed who planted all of the apple trees in NY.  The supernatural element is just part of the anatomy of a legend.  King Arthur was an ideal warrior King and hero, and our fictional heroes today have supernatural abilities as well.  Think about Superman.  Real people can't fly or see through buildings, but our hero can.  The extraordinary provides excitement and entertainment, as well as characterizes the capabilities of characters.

- Heroes and Villains are Clear:  King Arthur is the ideal good guy.  All other knights and kings can look to Arthur as an example of what a warrior and king should be.  Sir Mordred, on the other hand, is the quintessential bad guy.  He demonstrates the dark side of human nature.  This obvious difference is meant to be an educational tool in order to teach the right way to fight and rule from the wrong way.  Of course good doesn't mean perfect.  Even good characters make mistakes, including Arthur; but even when mistakes are made, it is always clear whether or not that character is essentially good or bad.

- The Action is Episodic: That means that the events of Arthur, although they connect to create an entire tale, each have their own setting, cast, and plot, like episodes of a television show.

"The Day of Destiny" from Morte Darthur by: Sir Thomas Malory 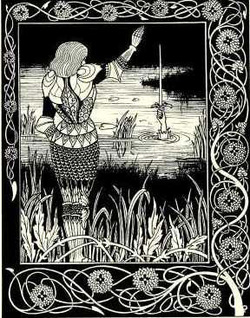 This is the end of the the Arthurian Legend, and we will be looking at what brought about the downfall of this ideal king and ideal kingdom.

Extrordinary events as Ordinary:
- Dream: Arthur's dream is a premonition, and is symbolically warning him of the events to come.  He is on a wheel, which symbolizes his rise to power; but just as a wheel turns to bring him to the height of his power, it continues to turn, bringing him down and symbolizing his fall from power and the end of his life. Notice also, the pit of snakes he falls into.  Of course it is a snake that causes the knight to draw his sword and unwittingly start the battle; but the snake also symbolizes the deceptiveness of those who have betrayed him and thrown his kingdom into turmoil (Sir Mordred, Lancelot, and Gwenevere).
- Vision: Sir Gawain died in battle, but he returns to King Arthur in this vision.  With him he has all the maidens he has helped throughout the years.  He warns King Arthur to not fight Mordred that next day, but he advises to wait until Sir Lancelot can join him with his army.  He warns that if they fight that day, many men will die, including King Arthur.  Arthur accepts this vision as a normal warning and plans to follow the advice.
- Lady of the Lake: When Sir Bedivere is commanded to throw Excalibur into the lake, King Arthur knows that he has been disobeyed twice because of the ordinary false account of Sir Bedivere.  Arthur expects the extraordinary to happen when Excalibur is returned to the lady of the lake.

Heroes and Villains are Clear:
Sir Mordred is the obvious villain here, and King Arthur the hero.  Perhaps more than any other villain, Sir Mordred is the blackest because he has doubly betrayed King Arthur.  According to the Divine Right and the Great Chain of being, a King is appointed by God to rule. The concept of the great chain of being is that God has created a natural hierarchy within  the world, and chaos will ensue if one person endeavors to be higher than their natural place.  The universes natural order is God, Angels, Man, Animals, Plants, and then Objects.  When Lucifer decide that he wanted to be like the most high, he disrupted that order and sent heaven into chaos.   Now if any one under the king