Germanic Invasion: The Beginnings of the Anglo-Saxons 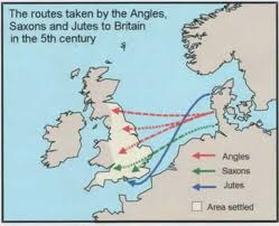 Germanic peoples dominated the European mainland after the fall of the Roman empire.  These Germanic tribes, mainly the Jutes, Anglos, and Saxons, were vigorous warriors and seafarers.  Their low lying farmland had poor soil, it was susceptible to flooding, and it was unable to support a growing population.  These people soon invaded Britain.
By 441 A.D. they had secured the mouth of the river Thames.  Just like the Celts and Romans had before, they conquered the south East of Britain and continued to push inhabitants either North to Wales and Scotland, or West to Ireland.  In some areas the Britons were allowed to coexist with the Anglos, Saxons, and Jutes; but by the 6th century the Britons had been expelled form the South East, and the Angles dominated the the lowland part of the Island, giving it the name: England.
This is the society where the legend of King Arthur originates.

The epic poem Beowulf faithfully records the culture of these Germanic tribes. Tribal societies were ruled by warrior kings, thanes, blood feuds, mead halls, boon, rewards, honor, and heroism.
Petty kingdoms arouse, taking over control of towns and lands that had been left without a government when the Roman Empire retreated.  Soon ambitious kings began to assert authority over other kings: the first, Aethelbert, ruled from 560-616 A.D. dreamed of creating a confederation of kings  and a united peace to the land.
Christianity often aided the efforts of those seeking peace for the Island.  The Christian church offered a developing power and influence for those supporting it.  As early as in the Roman days, Christian communities existed in England; and even though the pagan Germanic invasion nearly destroyed them, St. Patrick began converting Celtic Ireland and this revival spread into England and as far as Scotland.  Even so, Anglo-Saxon Britain remained mainly pagan until 597, when Rome sent St. Augustine to convert England and establish the first archbishop at Canterbury.
The spread of Christianity proved to play a crucial role in the development of Anglo-Saxon Culture.  Christianity connected the illiterate Germanic tribes to distant Rome, bringing an essential skill for advanced culture: writing.  Anglo-Saxon monasteries began copying books from Rome as well as religious texts.  The Church also taught new values of unity and peace to the warrior based Germanic society by emphasizing compassion and cooperation over arrogance and violence.
Anglo-Saxon Culture reached it's peak in the Mercian kingdom during the 8th century.  From this era, over 30,000 lines of Anglo-Saxon poetry have survived, as well as important historical prose such as Bede's Latin history of England.  During this era Anglo-Saxon and Christian cultures synthesized. The complex, interlaced patterns of ornament, once used to decorate the regalia of pagan warrior kings was used to illuminate the Bible manuscripts.  Christian themes began to color pagan tales.