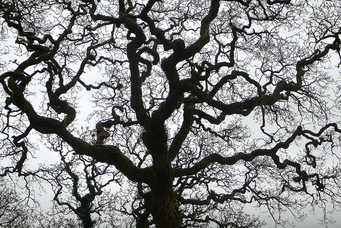 Nathaniel Hawthorne was against transcendentalism and he believed that humans were intuitively evil; but that does not necessarily make him a Puritan.  He had a strong sense of the active presence of evil in the world.  One of Hawthorne's ancestors was involved with the Salem witch trials and he was haunted with this ancestral guilt.  Hawthorne was born in Salem, Massachusetts, and in the introduction to his most famous novel, The Scarlett Letter, he stated that he took upon himself the shame of what had happened.  He hoped that this would then brake the family curse.   Even though Hawthorne criticized his Puritan background, he never fully escaped it and that Puritan foundation continued to influence his writing.

An allegory is a story with two meanings: Literal and Symbolic.  The literal is what is actually happening in the story, and the symbolic is the greater meaning that is being represented.
- It is an extended metaphor, meaning a comparison between the concrete objects and abstract ideas,  where objects, persons, and actions have meanings beyond the literal narrative.
- The symbolic meaning has moral, social, political, and religious significance.
- Characters are the personification of abstract ideas as: Faith, Charity, Greed, or Envy. 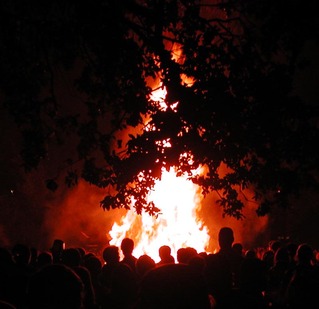 "Young Goodman Brown" is an allegory, and to help interpret the abstract meaning of the short story we are going to look for Symbols and Foreshadowing.

Symbols: A concrete object or event (something that can be seen, touched, heard, smelled, or tasted) that represents something other than itself, frequently an abstract idea.
- A heart symbolizes love, although love itself is an emotion and not a concrete object.
- A Dove with an olive branch in it's mouth symbolizes Peace.
Symbols in "Young Goodman Brown:"
- The Staff
- The Town
- The Woods

Foreshadowing: Hints given to the reader to clue them into what is coming in the plot.  It helps to create suspense and it makes the end of the story seem inevitable.

Interpreting "Young Goodman Brown" as an Allegory:
Goodman Brown and Faith:
- Goodman Brown is Symbolic of any man and every man.  He and his wife, Faith, have only been married for 3 months, signifying that Goodman Brown is a new believer who has only had his faith for a short while.  He then makes a common mistake that many new believers make: he thinks he can leave faith for a short time and then return.  He is not making decisions by faith, and he ignores faith's requests for him to stay home.  He does not yet cling to his faith, but he vows that he will after he returns by saying, "after this one night I'll cling to her skirts and follow her to Heaven" (237).   He believes that despite his one night following his "evil purpose," he will be able to return to his faith and cling more strongly to it (237).  All though he assures his Faith that "no harm will come to thee," he leaves the shield of faith, refuses to make faith-lead decisions, and underestimates the destruction that will come as a result of his actions (237).
- Faith is symbolic of child-like faith and innocence. She is a young, pure bride.  The pink ribbons in her hair represent the childlike passion and purity of child-like faith.  She is also wise as she cautions her husband about going out into the forest.  She is the the epitome of and ideal christian faith, and exactly what Satan would want to lure Goodman Brown away from.
- Just as someone who draws away from God is more vulnerable to being drawn into spiritual destruction, Goodman Brown becomes more and more confused and doubtful the further he travels away from Faith.  He has left the will of God, he is no longer walking by faith, and therefore he has left his covering.  When the Satan figure chides him for being late, Goodman Brown replies that "Faith kept me back a while" (238). Faith has kept him from evil; but now that he left Faith's shield, he is vulnerable to the influence of the devil.
- "My Faith is gone!" (241).  This is his conclusion after Goodman Brown hesitates, yet has taken Satan's serpent-like staff, symbolizing his belief of what he has been told.  Satan describes the corrupt nature of the spiritual leaders of the town.  Satan tells him that both his father and grandfather went on this same journey.  He explains that in New England he serves on town boards, drinks with deacons of the church, and the courts support his interests.  Satan laughs at Goodman Brown's disbelief.  Goodman Brown is fully disillusioned after hearing and seeing that his Sunday school teacher, Goody Cloyse, and his minister, Deacon Goody, converse with the devil.  He cries out "Faith! Faith!" but his cries are unanswered and he cannot find his faith in the forest, only noises from the witch's meeting  (241). His despair is finalized when he sees a pink ribbon, a symbol of his faith, float down from the sky.  In his back-slidden state, he has lost all hope to regain his faith.  Despite having lost his faith, he still looks for her at the meeting.  His cry to her, shouting "Look up to heaven, and resist the wicked one!" saves him from being baptized into the group of witches and causes the whole scene to strangely dissipate. Even in his desperate and disillusioned state, his faith saved him.
Other Supporting Characters:
- The inner struggle of man between living by faith or living by fear and doubt is mostly represented by Goodman Brown, but the other supporting characters help to contribute to this struggle.
- The Elder:  this is the man who meets Goodman Brown in the woods and walks with him.
- He is wearing decent attire and is not instantly recognizably bad, yet he subtly slips doubts into Goodman
Brown's mind.
- Despite is nonthreatening appearance, there are clues that this man represents the devil.
- Goody Cloyse: She represents the corruption in the education system.  She is a Sunday school teacher and is
responsible for the religious education of the children in town, yet she is a witch.
- Deacon Goody:  He is the pastor, therefore he represents corruption in the Church.
- These are hypocrites who claim to be in the light while in fact they are promoting darkness.  These people demonstrate how the hypocrisy of strong or seasoned believers can destroy a younger believer's faith.
The Forest:
- The forest is a place of doubt and fear.
- Despite his caution, he is drawn deeper and deeper in towards the witch meeting.  He has left his walk of faith, and now that he is following his own old sin nature he does not have the power to resist. When he believes he has lost his faith, he has seemingly reached the point of no return.
- The forest symbolizes what sin and doubt will do to one's faith if they are allowed to go unchecked.  Sin and doubt will ruin a person's life, and the progression in the story is clear.  The deeper he goes into the forest, or the farther he backslides, the more he abandons his faith.  All of the heartache is avoidable.
The Ambiguity of the Outcome:
- Goodman Brown avoids a total baptism into evil, but  he does not leave the situation unchanged.  He is permanently damaged regardless if the whole episode was a dream or reality.   He is unable to regain his childlike faith again, in fact he "scowls at his wife" or child-like, innocent faith (244).

So how do you Interpret "Young Goodman Brown?"

Look under "Extending," #11 in your book (245).  Choose one of the interpretations of "Young Goodman Brown" and support your decision in a 5 paragraph, typed essay.

1. Hawthorne is revealing the hypocrisy of Puritanism by highlighting the fact that even those who appear to be pious and noble are actually sinners.

2. The story represents one man's disillusionment and loss of faith.  Unable to accept either the evils or joys of life, Goodman Brown lives and dies in Despair.

3. This is a reenactment of the story of Eden - an allegory of humanity's first fall from innocence and the resulting guilt.