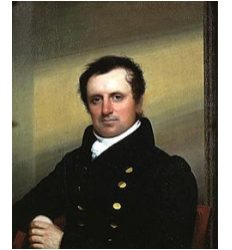 Just after turning one, James Fenimore Cooper and his family moved from New Jersey to an enormous estate in up-state New York that is now known as Cooperstown (home of the Baseball Hall of Fame). Although he lived in a fine manor house, the estate was surrounded by thousands of acres of woods and wilderness. Because of this, his up bringing was similar to a frontier boy in that he learned to ride, to hunt, to fish, and use a bow and arrow. He was well aware of the Native Americans who had once lived in the forest, and he even met Oneida Indians who camped nearby.  These childhood experiences served as the inspiration for his novels.  The character Natty Bumpo was patterned after an old hunter who was a regular visitor of the Cooper household, who always came bearing venison and adventurous tales.  Chingachgook is modeled after Old Indian John, the resident Indian in town.  Even the Indian attack on Cooperstown served as a template for one of the chapters in Deerslayer.
Fenimore Cooper briefly attended Yale (he was expelled after tying a donkey to his professor's chair), spent three years in the Navy, then married and settled down as a gentleman farmer in New York.  After being bored with an English novel, he reportedly threw down the book and boasted to his wife that he could write a better book himself.  So he did.  His first book was actually a boring tale of English gentlemen, unfortunately; but he soon shifted to more familiar and exciting topics for his next novels: the Revolutionary War (The Spy), the New York frontier (The Leatherstocking Tales), and the sea (The Pilot).
James Fenimore Cooper would become an internationally famous writer.  His writing style and craft is often criticized for romantic excess, stiff dialogue, and even indifference to detail; but he developed the new literary mode for America: the adventure tale.  His writing is full of vitality and energy, making him an excellent storyteller.  By the end of his career he had written 33 novels as well as volumes of social comment, naval history, and travel description. 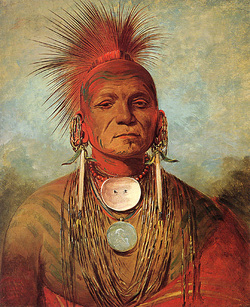 The following is an article by Geoffrey A. Grimes about the concepts shaping Fenimore Cooper's hero:

Basic Concept: Primitivism and the Noble Savage
"Primitivism" is a belief that arose during the European Romantic Movement that held that, because God is revealed in nature, people who live in the wilderness are closer to God; that they live purer lives.
.
The "Noble Savage" is an idealized stereotype of indigenous people as found throughout the world.  Its features include the exaltation of the character in wilderness settings, an exaggeration of physical prowess, a simplistic interpretation of the indigenous world view, and an assignment of lofty virtues and innocence to the common  man.

The roots of the concept of the Noble Savage are to be found, according to Hoxie Neale Fairchild (The Noble Savage), in:
1) the histories and chronicles of the European explorers and
2) Romantic philosophies.

The term "Noble Savage," itself, was coined in the 18th century by Jean Jacques Rouseau in his famous essay, "Social Contract."  To Rousseau, the Noble Savage represented the "natural man," that individual in an initial purer state, uncorrupted by contact with the complexities and compromises of society, living in nature according to nature's own rhythms and patterns (according to "natural law").
.
In America, the concept of the Noble Savage complements the early nineteenth-century fascination with the American frontier.  The idealized aborigine personified the mystery, the primitive power, and the spirituality assigned to the pristine forests.  In his text, The Great Frontier, Walter Prescott Webb notes the four options European colonists faced in dealing with the "Indian problem":
1) inter-marriage
2) social integration
3) segregation
4) genocide
With few exceptions, United States government policy and practice adopted the latter two options.  The Anglo population, however, registered a nervous ambivalence on the subject of the indigenous populations.  In a disdain stemming from his early encounters in the American West, Mark Twain once noted, "Take the beggar instinct out of the Goshoot Indian, and he wouldn't 'go' anymore than a clock without a pendulum.  The Goshoot Indian hoards dirt--for days, weeks, generations."  While Mark Twain came to change his attitudes about indigenous people, in doing so, his vacillation reflects the same anxiety.  Ironically, while some Anglo-Americans supported the removal of indigenous people for the American frontier, others, through the arts, came to idealize them in painting and literature. The fullest exploration of the Noble Savage appears in the Leatherstocking Tales of James Fenimore Cooper.
.
The celebration of the Noble Savage stopped short of cultism, but Cooper's five volumes came as close as any other artistic treatment to the canonization of the image.  Cooper creates the frontiersman Natty Bumpo, pairs him with a faithful Indian companion, Chingachgook, and sets them together in the American forest where they champion natural goodness set apart from innate evil, more specifically registered in incessant conflict between the Delaware Indians (the good guys all but extinct) and the Huron (a tribe of the detestable Iroquois).
.
The Leatherstocking Tales (The Deerslayer (1841), The Last of the Mohicans (1826), The Pathfinder (1840), The Pioneers (1823), The Prairies (1827)) chronicle the exploits of Cooper's hero, variously known as "Pathfinder," "Hawkeye," and "Natty Bumpo."  In each work, Cooper paints with broad strokes the natural "propensities" of his two heroes, so broad, in fact, as to attract a maelstrom of protests, led most hilariously by Mark Twain's "Fenimore Cooper's Literary Offenses."  In his 1852 edition of the series, Cooper lashed out at his critics, defending his "poetical view" of his subjects.

"A Rescue," from The Deerslayer 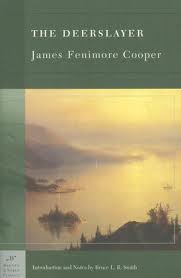 The Deerslayer, from which "A Rescue" is taken, was the last and perhaps finest novel in Cooper's five-part adventure saga, The Leatherstocking Tales.  As America's fist internationally famous novelist, Cooper developed not only the  adventure tale, a new literary mode for American, but also one of the most memorable and often imitated heroes in our fiction: Natty Bumpo, who in various novels assumes the names of Deerslayer, Hawkeye, Pathfinder, and Leatherstocking.
Many elements typical of Cooper's Fiction can be found in "A Rescue."
These include:
-  the brave, faultless hero
- The loyal Indian companion
- The encounter with physical danger
- Physical danger as a test of prowess
- The hair-breath rescue