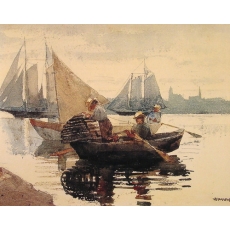 Walt Whitman speaks of the singing that he hears from the American workers in the poem "I Hear America Singing". This poem holds several different meanings depending on who the reader of the poem actually is. In order to make a complete analysis of this poem, it must be dissected and appraised.

Appraisal of "I hear America singing"

1. Line One-"I hear America singing, the varied carols I hear"- This line speaks volumes about what Walt Whitman was actually saying in this poem. He claims to hear many different versions of song as he walks along the streets of America. He does not say they are good or bad. He simply states that he hears varied carols. This can be taken to mean that the writer was striving to say something along the lines of good, bad, happy, sad, lively, and satisfied. America has many varied faces as would any country with such diverse cultures running through her very veins. Walt Whitman recognized this and wanted to share it with the world.

Mr. Whitman speaks of every possible positioning within the workforce. From the boss right down to the bottom of the work chain.  Whether mechanic, carpenter, mason, boatman, deckhand, shoemaker, wood cutter or ploughboy, there was a song to sing. Possibly Mr. Whitman was saying that each person had a story to tell. Each story is different from the other yet they all have the chance to speak it. Was Mr. Whitman suggesting the freedom of The United States when he speaks of each having his own song? It is highly likely that Whitman was speaking of the great freedom the United States had to offer every citizen, no matter the financial positioning they held.

3. Lines Seven Through Ten- "The delicious singing of the mother or of the young wife at work or of the girl sewing or washing. Each singing what belongs to her, and to none else; The day what belongs to the day At night, the party of young fellows, robust, friendly. Singing, with open mouths, their strong melodious songs."

The last lines in "I Hear America Singing" speak of mothers, wives, young girls and young men also having their own song. "Each singing what belongs to her". This can be taken to mean that all are equal here in the United States of America. It may be true that when Walt Whitman wrote this poem women didn't have the same rights as men. However, they did have the right to speak or "sing" as he so poetically put it.

The most important idea that comes across in this poem is the use of the word strong. Mr. Whitman is stating that no matter what song the individual sings in America, all are stronger when it is sung . It is sung loudly and clearly. This poem should be seen in the very bright light for what it truly means. Americans work hard to achieve their goals. The riches may never be seen in the financial statement of each citizen, but the riches are seen in the pride that Americans take in everyday living.