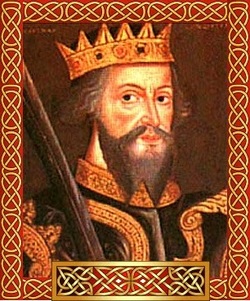 Although Harold was dead, England was not subdued without a length struggle, during which most of the Angle-Saxon nobility was wiped out.  Claiming that every bit of England belonged to him, William proceeded to redistribute lands belonging to 4,000-5,000 Anglo-Saxon nobles among 180 of his followers, in exchange for a solemn oath of loyalty to him and the promise of military service.  Under this system, known as feudalism, all the landowners in England became vassals (tenants) of the King.
Almost immediately after being crowned in 1066, William initiated work on the Tower of London, designed to protect that city.   Just four years later, in 1070, construction began on Canterbury Cathedral, one of the first building to utilize the new Norman style of architecture.
In order to set up an effective taxation system, in 1086 William carried out a survey of his entire kingdom, arousing great resentment among his English subjects. William's agents recorded most of the land in England, together with the name of the person who owned it, its sizes, its value, the number and type of workers employed on it, and so on.  "So thoroughly did [William] have the inquiry carried out," complains the Anglo-Saxon Chronicle, "That there was not a single hide (120 acres) of land . . .  not  even one ox, nor one cow, nor one pig which escaped notice in his survey."  This survey, officially referred to as "The description of England," was popularly called "Domesday (Doomsday) Book," because there was no appeal from its judgment.  The Domesday Book is still valuable today as a source for genealogical studies as well as for insights into medieval life.
William's policy for consolidating governmental power in the kingship was continued during the reigns of his two sons, William II and Henry I.  But when Henry I died without a male heir, the throne was contested by his daughter Matilda and his nephew, Stephen of Blois.  With the support of the Church, Stephen became king, but his mild rule soon let to anarchy.  "For every great man built castles and held them against the King," says a contemporary chronicle, ". . . and when the castles were built, they filled them with devils and wicked men.  By night and by day they seized those whom they believed to have any wealth, whether they were men or women; and in order to get their gold and silver, they put them into prison and tortured them with unspeakable tortures."  Things grew worse throughout the nineteen years of Stephen's reign and were only remedied during that of his successor, Matilda's brilliant son Henry II. 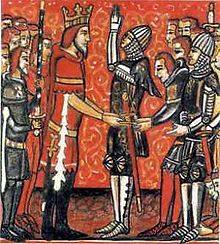 Feudalism was the type of  government throughout the Dark Ages.  Society was broken into a series of hierarchies based on the philosophy of The Great Chain of Being.  This idea was that the world had a natural order to its hierarchy, and as long as every one and thing was in that order, their would be peace.  If that order was broken, chaos would ensue.  The Great Chain of Being ordered the Universe as follows:
The Kingdom was then ordered into the King, Nobility, Knights, and Serfs.  If this order was broken there would be chaos.  When Lucifer wanted to be like the most high, he and a third of the angels ended up being cast out of heaven.  When Adam and Eve wanted to be like God and have the knowledge of good and evil, man eternally fell from grace and sin entered the world.
So how does that affect feudalism?  The King, who is the head of the kingdom only has one person above him on the chain, and that's God.  A monarch rules by Divine Right, meaning that God has appointed him as the king.  The Divine Right is then passed down from the rightful King, to the rightful heir.  If any one were to try to kill the king and usurp the throne, they would then throw the kingdom into chaos because they are usurping the natural order of the kingdom.
So how does Feudalism Work? Read over the diagram.

Think of a Kingdom as being divided up and governed like a state.  The King would be the Governor.  He governs all of the land and all of its inhabitants, and he would have the biggest castle in the biggest city with the most Knights and vassals under him.  His responsibility is protect the country and keep it running smoothly.  The Nobles would be like Mayors of individual cities. Each city consisted of a castle that the Lord and Lady lived in and the surrounding land that the Lord and Lady governed. The city would be and economical focus for trade, as well as a safe have if they were ever under attack.  The Lord and Lady would require the protection of Knights, who would be rewarded with land.  The land was then farmed by vassals(Villeins) who would pay rent and tax in food and military service.

The Crusades and Chivalry 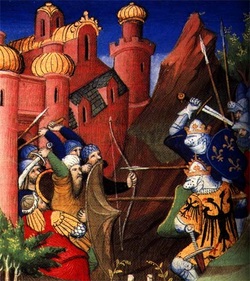 England became involved in the First Crusade in 1095.  Inspired by religious fervor, nobles and commoners alike undertook the long and dangerous journey to Palestine to fight eh Moslem Turks, who held Christian shrines there since 1071.  Also taking part in these expeditions was another Norman innovation - the Knight, the mounted warrior who became the chief symbol of the code of chivalry.  Far more than merely etiquette, chivalry was more nearly an aristocratic world view.  Its ideal affected the whole conduct of the lives of the nobility. That those ideals were more often professed than practiced id not lessen their influence.  Chivalry did soften some of the harshness of medieval life.   It bound the often lawless warrior by a code, the violation of which meant loss of honor.  In combination with a wave of devotion to the Virgin Mary that swept across Europe lat in the eleventh century, it raised the status of women and gained them a larger role both in life and in literature. 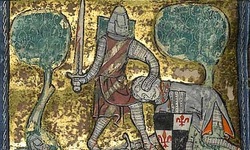 Higher education also had its beginning in England under the Normans.  As early as 1117, documents mention to a school at Oxford, and by 1133 its size and reputation had grown sufficiently for a theologian, Robert Pullen, to travel there from Paris to lecture.  Cambridge University had its origins just a few years later.
In 1136 Geoffrey of Monmouth finished The History of the Kings of Britain, including the first complete account of the rise and fall of the legendary King Arthur, thus contribution to the great body of Arthurian legend.  Bot in the original Latin version and a French translation, Geoffrey's book was enormously popular, so that toward the end of the twelfth century one writer exclaims, "Whither has not flying fame spread and familiarized the name of Arthur the Briton, even as far as Christendom extends."

England Under the Plantagenet Kings 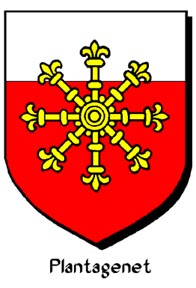 Henry II (called "Plantagenet" from the French name for the broom plant, his father's heraldic emblem) took the throne in 1154.  His first task was to subdue the great feudal lords of England and Normandy, who had grown so powerful during Stephen's weak reign.  He immediately raised an army and re-established the power of the monarchy.  A brilliant and tireless administrator, he reformed the judicial system and ran the operation of government so efficiently that at his death he left a surplus in the treasury (the last English king for over 300 years to do so).
The latter part of Henry's reign was darkened, however, by conflict with his wife, Eleanor of Aquitaine, and his friend, Thomas Becket, the Archbishop of Canterbury. The long and bitter struggle between Henry and Becket over the issue of the legal rights of the clergy reached its climax on December 30, 1170, when Becket was killed by four of Henry's knights, but apparently without the king's knowledge.  Becket's death was a disaster for Henry, both personally and politically.  England was horrified by the murder of its leading priest, who was immediately acclaimed a martyr.  Excommunicated by an outraged Church, Henry attempted reconciliation by restoring clerical rights, and even went as a pilgrim to Becket's shrine.
Henry's son Richard Coeur de Lion (the lionheart) spent most of his reign outside of England.  Having fought against the brilliant Moslem leader Saladin in the Third Crusade, he was captured on his return home and held for ransom by the Holy Roman Emperor.  While Richard was absent, his brother John tried unsuccessfully to size the throne.  John did finally attain the throne after his brother's death in 1199, whereupon he managed to alienate his nobles, the clergy, his late ally the King of France, and the Pope.  His autocratic rule, his personal excesses, and his heavy taxation finally led the nobles to rise against him.  On June 15, 1215, He was forced to sign Magna Carta, "The Great Charter," that limits the power of the king and is the foundation of the representative English government. Among other reforms, it defined and safeguarded the basic rights of nobles, clergy, and freemen; it established habeas corpus (protection against imprisonment) and trial by jury; and it gave the general council (the forerunner of Parliament) power over expenditures.

It was in 1295 that Edward I summoned the first English Parliament to include, in addition to the nobility and the clergy, two representatives "from every city, borough, and leading town."  The appearance of members of the middle class in Parliament was an indication of growing wealth and power of English cities like London and Norwich.
In 1337 England became involved in the Hundred Years' War with France.  The issue was English control of large parts of France, the English king holding possessions extending from the English Channel to the Pyrenees.  The early battles of the war were all great English victories, and the heroic Battle of Agincourt in 1415 made Henry V effective ruler of both England and France.  But eventually the French recovered, partly due to the inspiration of Joan of Arc (1412-1431). The fighting dragged on until 1453, when the French were finally victorious, and England lost all her French possessions except the Channel port of Calais.

Elsewhere in the World

Epics and poetry where developing spontaneously in multiple countries at once.
France: Troubadour Music
Italy: the Renaissance begins
Germany: The Gutenberg Bible and the movable type printing press.
Portugal: Christopher Columbus is sent to the Americas