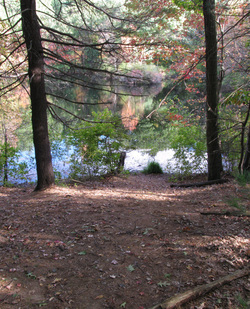 Can an individual really live out Emerson's transcendental ideas?  Thoreau went to Walden Pond in order to find out.

Thoreau embodied the transcendental themes of independence and self-reliance.  He also believed in following one's own intuition, and to do so, one must simplify their life.

Maybe we wouldn't live out in the woods in a 10'x15' cabin, so how would we simplify our lives in a way that Thoreau would approve?
=  "We do not ride on the railroad; it rides on us" (219).
- This epigram means that technology does not serve us, we serve technology. What do you think? Does technology serve and help us with our daily lives? Of does it clutter our experiences with social obligations and overloaded information?  Does technology reduce our interactions with our current situation or does it enhance it?

Do you dance to the beat of a different drum?
"If a man does not keep pace with his companions, perhaps it is because he hears a different drummer. Let him step
to the music which hears, however measured or far away" (219).
This is an extended metaphor represents man's ability to hear and follow his subconscious intuition, rather than what others are following.  Does this mean that you'll be without companions?  Can two people hear the same drum?

Epigram: a short and witty statement that is often in couplet form
"Cultivate poverty like a garden herb, like sage" (220). This is an epigram and a simile.
"Love your life, poor as it is. You may perhaps have some pleasant, thrilling, glorious hours, even in a
poorhouse" (220).
"Things do not change, we change" (220).

Finding the Main Idea:
The main idea is the most important point that he author is trying to make.  It can be up to the reader to interpret the main idea if, like Thoreau, the author only implies it rather than stating it directly.
Lets look at "Why I went into the Woods"
- Find a quote from each paragraph that expresses the main idea of that paragraph.
- What are four suggestions that Thoreau gives for simplifying life (look in the third paragraph)?
- Do any of Thoreau's ideas repeat?
- Sum up the section in a sentence of your own. 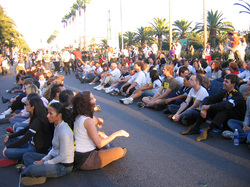 Henry David Thoreau was an outspoken abolitionist who believed that the Mexican War was being fought so that slave holding territory could be expanded.  Thoreau openly supported abolitionist radicals like John Brown; and in order to prove his disapproval of the Mexican War, Thoreau refused to pay his poll tax and was jailed for it.  When his friend Ralph Waldo Emerson visited Thoreau on his day in jail, it is rumored that Emerson asked, "Henry, why are you here?" Thoreau replied, "Waldo, why are you not here?"  The essay, Civil Disobedience, came from this protest, and it is still viewed as a manifesto for groups utilizing an individual's right to protest.

Civil Disobedience: It is the refusal to obey certain laws or governmental demands. The purpose is to influence legislation or government policy. Civil disobedient protests are nonviolent, and they use techniques like picketing, parades, sit-ins, boycotting, and the nonpayment of taxes.