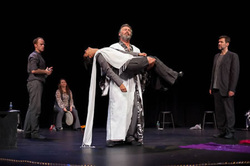 The word drama derives from a Greek verb that means "to do." A drama, a play written to be enacted, is waiting to be done.  Just as musical notes on a page come into our lives as art when they are played by musicians, the drama exerts its power when it is performed.  That power develops as actors portray characters who speak, quarrel, love, and occasionally die.
The script of a drama, written by an author known as a playwright or dramatist, may survive as a work of literature to be read.  When you read a play, keep images of stage (or film performance in mind).
"Staging the play" in your imagination will allow you to understand stage directions and dialogue.  For Example, a stage direction describing how two characters carry on conversation over a garden wall helps you picture the relationship between  the characters and imagine their appearance and movements.  When a stage direction indicates that a character's speech is an aside - words spoken so that the audience can hear but other characters cannot - you learn how the character is thinking or feeling.  Similarly, directions in a film script or a television play tell how characters move and talk, how the setting looks, and what props appear.  Camera directions, such as "fade in" and "fade out" for the beginning ad end of a scene, indicate how characters and settings appear on screen.
If you consider the play as a script for a performance, you may be able to read every line as the character would speak it. You will vividly picture the movements and expressions of every character, even without the help of the narrator.