Our Town
by: Thorton Wilder

Thornton Wilder on Our Town 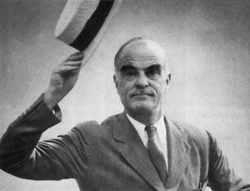 “(Our Town) is an attempt at complete immersion into everything about a New Hampshire
village which, I hope, is gradually felt by the audience to be an allegorical representation of all
life.”
“Our Town evades every possible requirement of the legitimate stage. It is pure description,
entirely devoid of anything even resembling conflict, expectation or action, which are usually
considered the component parts of any play.”
“At first glance, (Our Town) appears to be practically a genre study of a village in New
Hampshire. On second glance, it appears to be a meditation about the difficulty of, as the play
says, ‘realizing life while you live it.’ But buried back in the text, from the very commencement
of the play, is a constant repetition of the words ‘hundreds,’ ‘thousands,’ ‘millions.’ It’s as though the audience – no one has ever mentioned this to me, though – is looking at that town at ever greater distances through a telescope. I’d like to cite some examples of this. Soon after the play begins, the Stage Manager calls upon the professor from the geology department of the state university, who says how many million years old the ground is they’re on. And the Stage Manager talks about putting some objects and reading matter into the cornerstone of a new bank and covering it with a preservative so that it can be read a thousand years from now. Or as a minister presiding at the wedding, the Stage Manager muses to himself about all the marriages
that have ever taken place – ‘millions of ‘em, millions of ‘em…who set out to live two by two…’ Finally, among the seated dead, one of the dead says, ‘My son was a sailor and used to sit on the porch. And he says the light from that star took millions of years to arrive.’ There is still more of
this. So that when finally the heartbreak of Emily’s unsuccessful return to life again occurs, it is against the background of the almost frightening range of these things.”
“Our Town is not offered as a picture of life in a New Hampshire village: or as a speculation about the conditions of life after death (that element I merely took from Dante’s Purgatory). It is an attempt to find a value above all price for the smallest events in our daily life. I have made the claim as preposterous as possible, for I have set the village against the largest dimensions of time and place. The recurrent words in the play (few have noticed it) are ‘hundreds,’ ‘thousands,’ and ‘millions.’ Emily’s joys and griefs, her algebra lessons and her birthday and her birthday present what are they when we consider all the billions of girls who have lived, who are living and who will live? Each individual’s assertion to an absolute reality can only be inner, very inner. And here the method of staging finds its justification- in the first two acts there are at least a few chairs and tables; but when Emily revisits the earth and the kitchen to which she descended on her twelfth birthday, the very chairs and tables are gone. Our claim, our hope, our despair are in the mindnot
in things, not in ‘scenery.’…The climax of this play needs only five square feet of boarding and the passion to know what life means to us.”
“When you emphasize place in the theatre, you drag down and limit and harness time to it. You thrust the action back into past time, whereas it is precisely the glory of the stage that it is always ‘now’ there.” 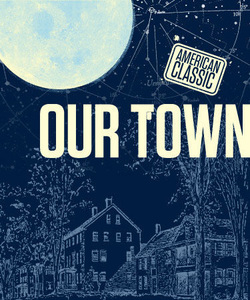 1. People should appreciate life while they are living it.
2. Carpe Diem: Seize the Day
3. The Little things in life are really the big things.
4. No town can isolate itself from the rest of the world.
5. No community is perfect, even idyllic Grover's Corners.