Unit 3: The Age of Reason

2. The Age of Reason in England

English version of Rationalism: experience & reason should be given equal place when examining the human condition
–This made the English less “Rational” than the French and other continental versions
–Many of the most important writers of this period were opposed to the rationalist ideas of social progress and human perfectibility

3. The Age of Reason = The Neoclassical Age

•Many of the authors based their prose and poetry on classical models
•Classical here refers to Ancient Greece and Rome
•Classical writers are people like Homer, who wrote the Iliad and the Odyssey, or Ovid wrote the Annelid.

4. An Age Concerned with:

6. The Age was also stimulated by great Scientists

•Sir Isaac Newton:
–Principa (1687) first set forth the laws of gravitation
•It was a period that advocated the use of scientific method to test old theories and to develop new knowledge. 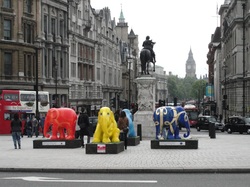 8. The Restoration brought many changes to England.

•The Anglican Church was once again the established church
•Charles II reopened theaters, which that puritans had closed, and even sponsored a troop of actors
•1662: Charles II chartered the Royal Society.
–This made scientific activities and investigations official
–The Society required the use of the scientific method in all of its investigations
–Required that reports be written in clear, simple prose.

9. London had been receiving a shift in population from the country to town.  It became a thriving city, yet it suffered two major disasters in rapid succession.

•Plague
–1665: sickness ran rapid through the city
–70,000 of London’s inhabitants were killed
•Fire
–1666: June –When the plague abated, fire broke out
–It took 5 days to extinguish
–It left 2/3 of the population homeless

14. The Rise and Growth of the Middle Class

•The middle class had begun to merge with landed gentry through:
– Marriage
–Concerns for wealth and property
–Movement into a position of social dominance
Jobs were opening up in: Mining, Construction and factories.  All of these jobs were spurred by the invention of electric machinery, and this would eventually result in the Industrial Revolution.

Download the Power Point file to read the rest of the notes.