The Canterbury Tales by Geoffrey Chaucer

Chaucer and The Canterbury Tales

Geoffrey Chaucer was born about 1340 (in the reign of Edward III). He died on October 25, 1400, in the year after the accession of Henry IV and the death of Richard II, whose reign, starting in 1377, thus falls entirely in the poet's life. The son of a prosperous wine-merchant, Chaucer entered the household of Prince Lionel (later Duke of Clarence) in 1357, beginning a very successful career as a courtier (a kind of civil servant and diplomat). He was page, among others, to John of Gaunt and briefly saw military service.

Captured in 1360 on an expedition in the Ardennes, Chaucer was promptly ransomed, partly by the king, a measure of his value to the state. Chaucer rose to high office, becoming a Justice of the Peace for Kent and, in 1386, a Knight of the Shire. In this year his career was interrupted by John of Gaunt's absence in Spain, but on Gaunt's return in 1389, Chaucer again was promoted to high office. Chaucer lived through the plague known as the Black Death, the Peasants' Revolt (1381, a protest against the original Poll Tax) and the deposition of Richard II. In spite of the turbulence of the times, as shown (retrospectively) in Shakespeare's history plays, Chaucer seems to have enjoyed success and favour throughout his career. He was the first poet to be buried in what is now known as Poets' Corner in Westminster Abbey.

Although much excellent literature was written in English before the Norman Conquest, the form of the language (Old English, sometimes known as Anglo-Saxon) makes it foreign to the modern reader, while the literary forms are similarly remote from us. Chaucer is the first writer of note to produce substantial works in a form of English that is recognisably the same language that we speak and write today. To many readers, Chaucer's English is still difficult to read without help, but under the surface difficulties we find much that is readily accessible to the modern student. In the estimation of most critics, Chaucer is the most important writer in English before Shakespeare, and one of the handful of English-speaking authors whose merits are not in dispute: he is known, for these reasons, as the “Father of English Literature”.

Chaucer was highly educated and read widely, in Latin, French and Italian. His reading influenced both his subjects and his methods as a writer. His work includes a number of long poetic works, starting with The Book of the Duchess and The Romance of the Rose (a part translation of an allegorical French poem). Later works are The Parliament of Fowls, The House of Fame, Troilus and Criseyde and The Legend of Good Women. As well as many short poems, Chaucer wrote a prose translation of The Consolation of Philosophy by Boethius.

The Canterbury Tales, The Prologue 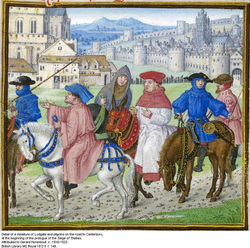 Chaucer's most celebrated work is certainly The Canterbury Tales. Begun by the 1380s, it was never completed, and modern versions of it are productions of scholars, who have attempted to make the least bad arrangement of its various completed parts. Editors know these parts as "Fragments" but they are of considerable length.

Within a very detailed narrative about a visit to Canterbury, Chaucer sets a series of stories. These "tales" are narratives, mostly in verse (Chaucer's own story of Melibee and The Parson's Tale are in prose). While the tales are coherent and skilful examples of the story-teller's art, each in its own right, Chaucer has contrived them in ways which increase our enjoyment: for example, each tale in some way reflects what we learn elsewhere about the character of the teller (in the General Prologue or in the prologues or linking narratives written for the individual tales).

Tales are grouped in ways which constitute debates on topical subjects (such as the nature of marriage) or to achieve effects of contrast: the Knight's Tale (a worthy tale, eloquently told by a speaker of the highest social class) is followed by the much shorter, bawdy Miller's Tale. We are led to think that this "low" narrative is in every way inferior to the Knight's, but the story-telling is masterly in its wit and economy: Chaucer at once shows that there is more than one way to tell your story, and that style should be appropriate to subject. Chaucer himself appears, not only as the recorder of the events on the journey and the stories he heard, but as a character in his own right. He makes judgements, frequently misleading, on the quality of the stories, and (a deft touch) telling his own first attempted tale (Sir Topaz) so boringly that he is stopped and made to try again with his tale of Melibee.

The General Prologue to the tales, explains how Chaucer found himself, one April day, in the company of a group of pilgrims, riding from London to Canterbury, each one of whom he describes vividly for us. As they set out from their inn (The Tabard in Southwark) their "Host" (Harry Bailly, the innkeeper, acting rather as a courier or tour guide today) proposes that as they ride out and return, each pilgrim should tell two tales (four in all). On their return to London, the teller of the best story (as judged by the Host) will win a meal, paid for by all the rest. The Host invites the Knight, in view of his social standing, to begin the game. As the Knight finishes his (very long and dignified) tale, the Host invites the Monk to follow suit, but is thwarted by the drunken Miller, who insists on speaking next: from this point on any notion of choosing the tellers of the tales by (descending) social standing is forgotten. Unfortunately, though the fragments show how the tales might be grouped in a given part of the work, the overall sequence of the fragments is not known. Moreover, each teller only has a single complete tale (Chaucer has another incomplete tale), and there is nothing at the end to correspond to the General Prologue. In spite of these omissions, the work as it stands is enormously entertaining.

When determining the character of the pilgrims, it is important to consider these elements Chaucer used in his characterization:
1. Internal & External Descriptions: 1. Whenever Chaucer the poet describes the external appearance of a character or the internal personality of a character, it works as a two way street.
-External:  Appearance, mannerisms, possessions, and actions
-Internal:  Personality, spirituality, maturity, and character
The external description is meant to reveal something about the internal state of the character, and the internal personality is supposed to be reflected on the outside of the character.
2. Position:  The important information is placed in the beginning and the end of the description.  In order to determine the essential information, always return to what is first said about them in the first 4 lines, and what is last said of them in the last 4 lines.
3. Space:  How many lines are given to a topic is an indication on how important it is. When a lot of lines are given to a topic, it is important to ask what does this show about the character of the pilgrim?
4. Juxtaposition: When two pilgrims descriptions or tales are placed next two each other, it may be because they are meant to be compared.
5. Repetition: When an idea, description, action or physical description is repeated, it shows that it is an important key to understanding that character.