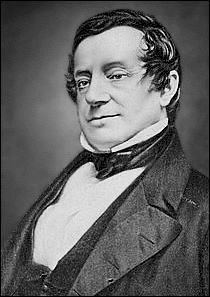 Washington Irving was the United States' first person to claim writing as his profession.  Named for George Washington, and born five months before the end of the Revolutionary War, Washington Irving would similarly be a patriarch of the United States.  Washington Irving is a literary patriarch who wrote from the age 13 until he died shortly after publishing the 5th volume of The Life of George Washington.
His father being a Scottish Presbyterian, Irving was brought up in a religious family.  Still, Irving was very much involved in the emerging arts of nineteenth-century American: music, literature, and theater.  He would even go to a play, return home for evening prayers, and when his parents thought he had gone to his room and went to bed he would sneak out the window and return to the play for the second half.
Irving decided he had learned everything his teachers could teach him by the age of 16, so he stopped going.  He became a lawyer, but found the daily routine of law to be boring and dull.
Irving and his group of friends who called themselves "The Nine Worthies," began to publish a periodical called Salamagundi (after a spicy appetizer).

Characteristics of a Folk Tale 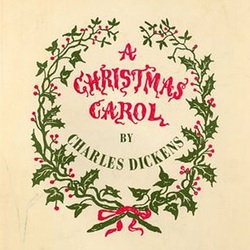 In order to look at the characteristics of a folk tale, let's use a well known example: A Christmas Carol by Charles Dickens. This famous folk tale focuses on the stingy Ebenezer Scrooge on Christmas Eve.  The miserly old man is visited by the ghosts of Christmas Past, Christmas Present, and Christmas Future after his deceased partner, Jacob Marley, comes back from the grave to warn Scrooge to change his ways before it is too late.

Folk tales have these three things in common:
1. Humorous Tone:  Although the plot is moralistic, the tone remains light and humorous.  Scrooge is being warned of the downfall that his greed has brought and will bring, yet there are many humorous instances.  During his tour of Christmas present, he hears himself mocked and ridiculed as he invisibly attends the party.
2. The main character is brought down by their own vice:  A vice is a character flaw that has not been corrected. Think the seven deadly sins: Sloth, Gluttony, Greed, Wrath, Pride, Envy, Lust. These vices are the opposite of the virtues a Christian should demonstrate as a fruit of the spirit.  The main character in a folk tale will demonstrate a vice that brings about their destruction.  In A Christmas Carol, Scrooge's vice is greed.  His greed has kept him from love, marriage, family, and friendship.  Jacob Marley is there to convince Scrooge to change his ways before it's too late.
3. Supernatural & Hearsay: In a folk tale, there is usually a supernatural element, or at least gossip about one.  Sometimes there are ghosts or the devil, sometimes there is just legends of supernatural events, and sometimes there is both.  In A Christmas Carol, there are ghosts, time travel, and invisibility.

"The Devil and Tom Walker" 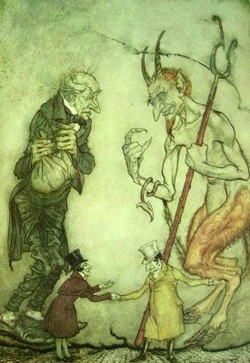 "The Devil and Tom Walker" is a folk tale about selling one's soul to the devil.  Tom Walker joins the ranks of men who are willing to deal with the devil for earthly gain. Tom is willing to sell his soul for pirate treasure, only to realize: "For what is a man profited, if he shall gain the whole world, and lose his own soul?" (Mathew 16:26).

Humorus Tone:  As sad as it is, the relationship between Tom and his wife is portrayed with a humorous tone.  Really, their marriage is tragic, dysfunctional, and depressing, yet how the narrator portrays them, gives information, and relates their thoughts toward one another is humorous.  Tom and his wife are so stingy that they won't even share with each other.  She hordes everything from him, and he is always looking for her hidden treasures.  She runs to see if the chicken has laid an egg as soon as she hears it cluck.  They often fight over this,

"The Legend of Sleepy Hollow"

The great American short story ‘‘The Legend of Sleepy Hollow’’ was written while Washington Irving was living in England, and it was published in England in a volume called The Sketch Book of Geoffrey Crayon, Gent. The Sketch Book was published in installments in the United States beginning in 1819, but the section that included this story was not issued until 1820. Readers on both sides of the Atlantic Ocean thus encountered the story at approximately the same time.

''The Legend of Sleepy Hollow'' takes place in Sleepy Hollow, New York, a snug rural valley near Tarry town in the Catskill Mountains. Constructed from German tales but set in America, it is a classic tale of the conflict between city and country, and between brains and brawn. Ichabod Crane courts Katrina Van Tassel, but is frightened away by his rival, Brom Bones, masquerading as the headless horseman. The story demonstrates the two qualities for which Irving is best known: his humor, and his ability to create vivid descriptive imagery.

Readers immediately took to ''The Legend of Sleepy Hollow’’ and another tale from the Sketch Book, ‘‘Rip Van Winkle.’’ Although little formal criticism greeted the arrival of the story specifically, the Sketch Book became wildly popular and widely reviewed both in the United States and in England. It was the first book by an American writer to become popular outside the United States, and helped establish American writing as a serious and respectable literature. In 1864, ‘‘The Legend of Sleepy Hollow'' was published as a separate illustrated volume for the first time, and there have been dozens of editions since. Today, most of Irving's work has been largely forgotten, but the characters of Ichabod Crane and the Headless Horseman have lived on as part of American folklore.