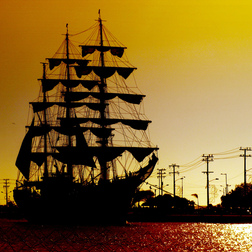 Herman Melville was born into a wealthy family in New York City.  His father was an import merchant and would often tell Melville and his 7 brothers and sisters of adventures on the high seas.  His father died when Melville was 13; and after taking a series of unsatisfying jobs, Melville took a position as a cabin boy on a ship to Liverpool, England.
Melville's early years of sailing around the world provided much of the background material for his literary works.  He sailed on various merchant and whaling ships, as well as spent time on the United States, a Navy vessel. His first trip to Liverpool was the basis for  his  novel Redburn. His travels into the South Seas on a whaling vessel lead to Moby Dick. This also well as resulted in his jumping ship and staying on the Marquesas Islands with the cannibalistic tribe of Typee.  He described this stay in Typee. An Australian whaling  ship carried him from the Typees to Tahiti, which in
Typee and Omoo became wildly popular with the  public; but the public had no interest in Melville's allegories and ambiguities.  By the time Moby Dick was published, the public had lost interest in Melville.  It took seventy years before Moby Dick was popularly read and recognized as one of the greatest American novels of all time.

"What Redburn Saw in Lancelot's Hey" from Redburn 1849 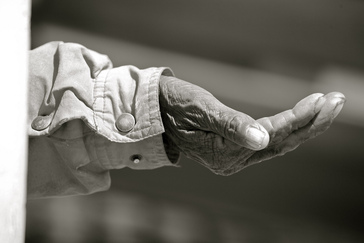 About the novel, Redburn:
Redburn was Melville's fourth novel.  It is also his most overtly autobiographical work as it parallels Melville's experiences while sailing from NYC to Liverpool and back as a deck hand in 1839. The book follows the main character, Redburn, as his father's death throws his family into financial decay.  As a result, Reburn takes to sea and reports incidents on the ship as well as in port.  Melville discredited this book by calling it a "nursery tale," claiming that he wrote it quickly in order to make some money.


Major themes:
- Confrontation between Innocence and Corruption: In "What Redburn Saw in Lancellot's Hey," the innocence of Redburn's concern for the dying mother and children is in constant conflict with the corruption of Liverpool. The characters that he asks for help represent multiple layers of society, and each layer's compassion is corrupted.  The poor women searching for scraps are self-righteous, claiming that she deserved to be in her condition for having three children and never being married.  The officers that he questions tell him "what business is it of yours?" and "leave it to the town" (250). The officers shirk their duties claiming that it's not their street and therefore not their problem.  The Porter refused to allow them into the warehouse; and Handsome Mary, the keeper of the boarding house, said that she already gave to those on her street and couldn't afford to help the whole community.  The cook, Brandy Nan,  just cussed him out for asking.  Not even the Dock Police were interested in helping.  Redburn's innocent response to help the woman was confronted with the corrupted and disillusioned residents of Liverpool.  The confrontation shifts between man vs. society to man vs. himself when he fluctuates on what to do to help the woman and children.  He gives them stolen bread and water, yet he struggles with the idea that he is not helping but hurting them by prolonging their suffering.  He struggles with his own corruption as he says, "I felt an almost irresistible impulse to do them the last mercy, of in some way putting an end to their horrible lives; and I should almost have done so, I think, had I not been deterred by thought of the law.
- Loss of a Father: In the rest of the novel, this is a more prevalent theme; but it can still be seen in this section.  Redburn has a strong emotional response to the sight of the two emaciated girls.
- Christian Brotherhood: