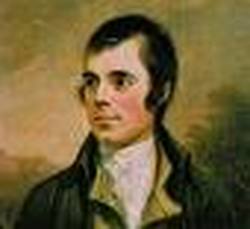 Robert Burns was born the eldest of seven children and grew up in a two room cottage in Scotland.  His family came from a long line of poverty and much of his childhood was spent slaving away at back-breaking labor on poor land.  Burn's was known to plow the fields with a book of ballads in his hand.  He was especially interested in preserving Scottish songs.  Even in his miserable condition, he developed a love of nature and rustic life.
At the age of twenty-six, his father had died and left the farm to his brother, his heart had been broken twice, and he had fallen into drinking and dissipation.  He had decided to start anew in Jamaica, but he put together a book of poems before he left.  The book ended up throwing him into success.   He was soon swept into Edinborough society, but only as a rustic novelty.  He never gained the respect of the literary societies, mainly because he enthusiastically played the role of an arrogant, overly eager literary celebrity.  He became disillusioned with city life, so he married and moved to the country.  There he spent his remaining years in declining health collecting and cataloging Scottish songs.
He is grouped with the Romantic poets because his poetry contains the Romantic's themes of the appreciation of nature, respect for the earth, and the corruption of society. 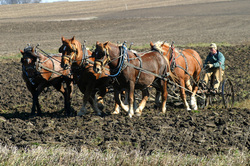 "To a Mouse" was written in the vernacular,  his Scottish dialect.  The plot of the poem is that a farmer is plowing his fields and he plow's through a mouse's nest, destroying it.  He then talks to the mouse, concluding that the mouse is not the only  one failing to build wisely for the future.  It was not wise to build a nest in the plow's way, but how could the mouse have known?
Themes:
- Respect the Earth: Respect nature and natures creatures, even the mouse.  It is especially necessary to respect the small, defenseless, and downtrodden.  The mouse is literal, but metaphorically the mouse represents the lowly human beings being tyrannized by the high and mighty.  The respect for nature and human life resonate with Romantic ideals.
- Foolproof Plans Can Go Awry: The mouse is not the only thing that fails to build wisely for the future, men fail at that too.  This theme is demonstrated in the line maid famous by John Steinbeck, "The best laid schemes o' mice an' men / Gang aft a-gley [go awry], / An' lea'e us nought but grief an' pain / For promised joy" (39-42).   The nest that was supposed to keep the mouse in hibernation for the winter is destroyed, and this is like  political systems, wars, and businesses that were supposed to be successful, but weren't.

So how does the plot of John Steinbeck's Of Mice and Men represent these themes?